When you see the term Mindful Eating you might have an idea what it means. I thought I did when I first saw it. I guess I did in a simplified version but the more I learned about it, the more it really opened my mind. It also opened a new door regarding the way I eat.

If you’ve tried to follow just about any app, diet plan, or “lifestyle change” program recently you may have heard things like “Are you really hungry or are you actually thirsty?” or “Do you really want that chocolate cake or are you eating it just because it’s there?” Things of that nature. That’s part of it.

If you think the opposite way and think about “mindless eating” one might picture someone sitting in front of a tv throwing down a whole bag of chips. Or grabbing a cookie from the cookie jar every time you go past because it’s become habit. They might not even realize they’re doing it all the time, it’s almost become automatic.

I’ve been learning about mindful eating through Noom but I’m seen it mentioned in several places recently. So mindful eating would become more aware of your habits, your surroundings, and your triggers. Learning to slow down and appreciate your food without preventable distractions such as cell phones and televisions. Learning to appreciate the flavors in your food, the textures, the sources and ingredients. If you’re wondering about lunch with friends or dinner as a family, it’s actually beneficial. Sitting around a table eating and talking rather than sitting wherever you land while playing on your phone. Taking in the atmosphere, the smell from the foods, etc.

So maybe that’s an extreme example but it does help me to slow down and enjoy the food more and appreciate it. It’s not inhaling Doritos while writing a blog post (cough cough I have no idea who used to do that).

Sometimes it’s catching yourself when you mindlessly grab for the cookies on the table and you say to yourself, “ok Ang, you’ve already had a cookie but you’re not really hungry” or “I think I want it because it’s sweet and crunchy, l’ll eat an apple instead.”

So I hope this post has helped you understand the mindful eating buzzword a little better.

As a kid I was raised in a family of 6. I lived in a 1/2 a house (or duplex if you will) in an old mining town. My parents were not rich. My dad had worked for a company called NAVco but kept getting periodically laid off. My mom would occasionally work a minimum wage part-time job here and there. One was at Hills department store. Eventually my dad got a job with the Post Office and things got a little better. I have to say that we always had enough. I never remember being hungry.

Very rarely if at all did we have things like packaged snack cakes, name brand chips, steaks, or roasts or the gimmick treats like dunkaroos or gushers. I remember homemade pizzas, baked mac n’ cheese, honey bread, peanut butter and jelly roll ups, and shit on a shingle. Well we actually didn’t call it that back then. My mom simply called it cream of mushroom soup over toast. My mom didn’t swear much and she didn’t want us to call it that. This was the poor man’s version of shit on a shingle (S.O.S.) . You can find recipes online that actually call for chipped beef and a bunch of ingredients. From my understanding that is the true shit on a shingle but this is the version I grew up with.

I heard it started as a food many service people ate during the war. My grandfather talked about how it was a meal in the mines.

Today I have my own family of 6 but we’re better off than my parents were. I still introduced my kids to S.O.S. and they like it too. It’s not something we have all the time. It’s just one of those things I like when the mood hits.

I’ve been dying to try Blue Apron for some time. I had so many questions though: Does it really come with EVERYTHING I need to make the recipes? Is the serving sizes really going to be enough for my family? How can they deliver fresh ingredients and have them still be fresh?

I got my first box. I was so excited to open it up. I got the family plan so I was supposed to get enough to make 2 recipes.  When I opened my box it was stuffed full of fresh ingredients. 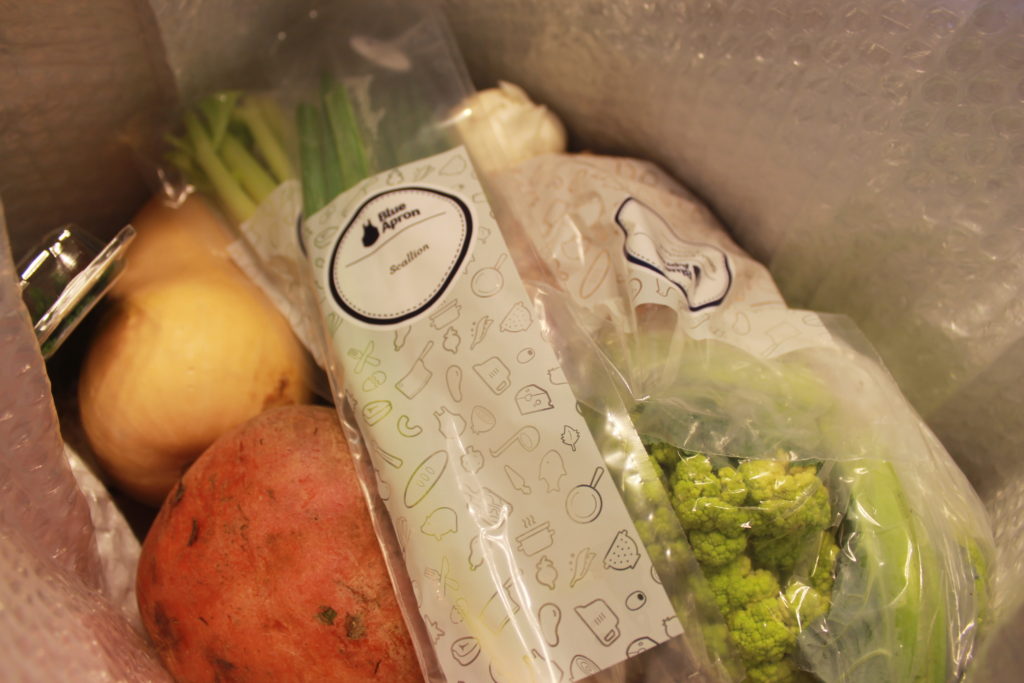 It’s packed well with dry ice packs and an insulated pack so the food was still cold when I received it.  As I pulled all the ingredients out I was surprised to see the big healthy looking beets, fresh chives, and even a cup of plain greek yogurt needed to make one of the recipes. I did a facebook live unboxing video that you can see here:

Everything is labeled. For the record, the recipe “knick knack” bags that I wasn’t sure what they were in the video contained things like: spices, oils, and sauces.

I really do try to cook a decent meal as often as possible for my family. I get into a rut though with what to make. I feel like I’m making the same things over and over again. When I ask my family what they want it’s usually “I don’t care” or the few family faves they request. Blue Apron is a welcome addition to our family meal planning. No running to the store to get ingredients to make these recipes. No wondering if you have the ingredients to make something. And recipes that might be a bit different than what you’re used. For me that’s more than welcome.

When I was making the recipes I found the only things I needed that weren’t included in the box were: salt, pepper, water, and olive oil. Even the salt and pepper is optional though. 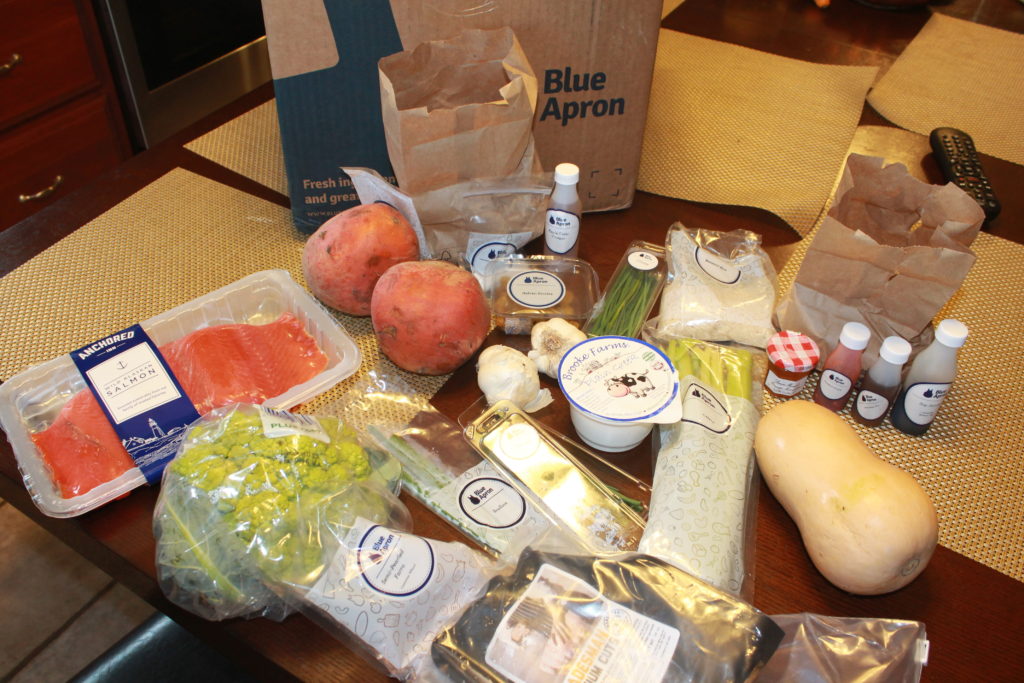 Blue Apron has a deal right now to get $80 off your first 4 boxes.

I received a free box to partner with Blue Apron.  I will also be compensated for referrals.