Kylie Minogue’s newest album The Abbey Road Sessions is available now.  For Kylie Minogue fans this will be a great gift or stocking stuffer.  This album features Kylie’s biggest hits like you’ve never heard them before.  All songs have have been redone in a way you haven’t heard before.  No electronics, slowed down so you can feel the emotions of the songs.

This album was recorded in London at the Abbey Road Studios with her band and a full orchestra.  While this album has some of her biggest hits it also has some previously unreleased tracks, 16 tracks in all.  Did you know that Kylie has been making music for 25 years??!  She’s been celebrating her “K25” in 2012.  Her career consists of 60 million global album sales, lots of hit singles, global tours, and industry accolades.
The Abbey Road Sessions Track Listing:
1. All The Lovers
2. On A Night Like This
3. Better The Devil You Know
4. Hand On Your Heart
5. I Believe In You
6. Come Into My World
7. Finer Feelings
8. Confide In Me
9. Slow
10. The Locomotion
11. Can’t Get You Out Of My Head
12. Where The Wild Roses Grow
13. Flower
14. I Should Be So Lucky
15. Love At First Sight
16. Never Too Late
Did you also know that Kylie is a breast cancer survivor and donates her time to the American Cancer Society along with amFAR for AIDS research?

Kylie will be appearing on Dancing with the Stars on Nov. 13 and on The Tonight Show with Jay Leno on Nov. 14.
Kylie’s newest single “Flowers” she actually wrote several years ago following her battle with breast cancer for the child she wishes she might still be able to have one day.  You can watch the video for her newest single here:

You can also find Kylie Minogue on social media

Where can you get Kylie’s new album The Abbey Road Sessions?
iTunes

As I was listening to the album I actually had to double check to see which song I was listening to at times.  The raw played down version of the song sometimes sounds much different than the original versions.  This isn’t a bad thing at all.   I really liked the song “Confide in Me” to me I could hear the emotion that the album talks about between the song itself and the orchestra adding to it.

***I received a copy of the album and have a chance to win prize for this post as part of the One2One Network.  I did not receive any other compensation for this post.  Any opinions expressed are my own.***
Sign up for Free Stuff, Fun Sites, Contest and More feed

My boys got the original Skylanders from their grandfather for Christmas about 2 years ago. The kids loved it.  Each Skylander sits on the “Portal of Power” to take the Skylander you choose to play with into the game.  Each characters info is saved within the base of the character.  You can even take your favorite one with you to play at a friends or family member’s house and your info will carry with the character.
This year the hot update to Skylanders is the Skylanders Giants.  The giants were banned from the Skylands but the evil portal master Kaos is back.  Now the Sklander Giants but team up with the Skylanders to battle a new threat.
If you’re new to Skylanders it’s best to start off with the Giants starter kit.  You get the Skylanders game, 3 figures, and the portal of power.   Here’s one of the starter sets I found at the Best Buy in Monroeville, PA.  You can see it has 2 regular Skylander figures and 1 Giant along with the portal and game.  The Skylander Giants starter packs are $74.99. 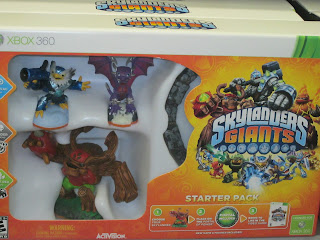 There was a whole section with tons of Skylander figures to choose from.  My dad get the kids new Skylanders each year with their Christmas presents.  The game is so much fun with lots of colors, cute characters, but fun battle seens to keep both boys, girls, (and yes even grown ups) entertained.  I have 3 boys ages 3, 8, and 10 and they all love to play Skylanders.  Each of my kids seem to have their own favorite character too. 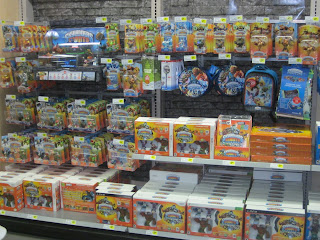 The set up had an interactive display say you could see the new characters abilities and scenes from the game.  They also have neat storage containers so you can keep track of all your Skylander characters.
Skylanders Giants is available on PS3, Xbox 360, Wii, and Nintendo 3DS and can be found at Best Buy stores or online at http://www.bestbuy.com/giants
***The reviewer has been compensated in the form of a Best Buy Gift Card and/or received the product/service at a reduced price or for free***
Sign up for Free Stuff, Fun Sites, Contest and More feed

I don’t know about you but I used to LOVE Friends.  I’ve probably seen every episode and some of them multiple times.  I can remember Phoebe singing “Smelly Cat” and Ross’s pet Marcel.  I used to really like Chandler.  He might have been my favorite friend.  At one point, I also had “the Rachel” haircut.

Check out this Friends clip below.  Do you remember some of this?  You can check back for even more clips.

If you have a family member or friend who was into the Friends series like I was, the Friend Complete Series box set would be a fun gift idea and great for those cold winters.  I could picture myself sitting down with a cup of hot cocoa and having a Friends marathon.

And of course because Warner Bros. is so cool they’re going to offer a neat little giveaway here on LuvSavingMoney.info.
GIVEAWAY
1 Luv Saving Money reader will win 2 oversize coffee mugs (like the ones used at the Central Perk) and a door frame just like the one on Monica’s door!
US only

***I did not receive any monetary compensation for this post. Any opinions expressed are my own.**

I’m trying something new this year folks.  Even though I’ve been blogging for nearly 4 years I’ve never ever done a Holiday Guide.  I really don’t know why.  I decided to try my hand at it this year.  Why this year?
–I’ve already had a few sponsors ask me if I’m doing one
–I have a few reviews coming up that I thought would make fantastic holiday gifts
–I thinks it’s going to be fun
I’m going to feature gift ideas for everyone some for women, some for men, some for babies, for the whole family, boys, girls, etc.  It’s not just about gifts though it’s going to be about preparation for the holidays Christmas cards, decorations, as well as holiday cooking/baking, cleaning, etc.  I have a great company to feature later in November for holiday cooking/baking.  If you’re a company, PR rep, independent consultant,  that wants your product or service featured, let me know.
If you’re a company that would like to be included on Luv Saving Money’s Holiday guide for 2012 send me an email Angie: angiewith3 at live dot com  and I’ll be happy to give you details and options.

You can also get stats for Luv Saving Money here: http://angiewith2.blogspot.com/p/luv-saving-money-media-kit-and-blog-info.html  If you’d like to check that out before contacting me